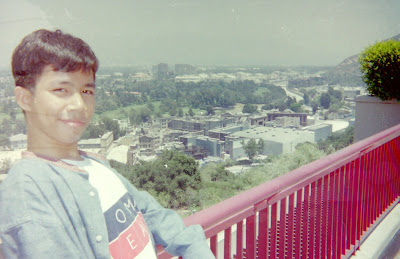 I’m gonna tell you something.

In 20 years, you’re going to want to celebrate your birthday with a big party.
That’s not gonna happen.

There are so many things that will not work out for one reason or another.
That’s just life.
And I know you hate it. That’s not gonna change.
But you’ll live with it. You’ll be happier that way.

And that’s exactly why I want to reach out to you from 20 years in the future.

By the time this photo was taken, you just got the speech from Papa.
He says you act like you carry the whole world on your shoulders.
And I know you’re not gonna wanna hear this: He’s right.
It’s actually pretty annoying to remember now. 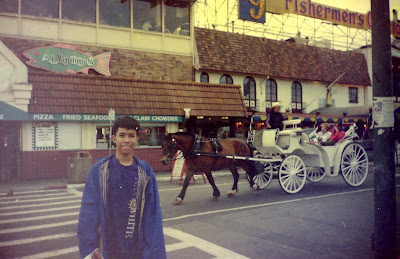 Here’s the thing and it’s probably hard for you to believe right now: You’re going to come out of this funk the big winner.
Let me tell you why.

You know that novel you just started working on now based on your insecurities? Well, you’re going to end up writing three of them before you even turn 20. You’re not going to get them published (because you’re shy) but you will get a good exercise out of it.

In a couple more years after that, during a time you feel like you’re at your lowest, you’re going to hit upon an idea that will define your life’s work.
Yep, you’re still working on it 20 years down the road.
It’s taking a while but it’s going to be your biggest passion project that will give your life a little focus.
You will grow. You will learn. And this project will change as you do.
And it’s going to be an amazing journey.

In about four years, you’re going to enter college and it’s going to kick off a series of events that will unravel so many other things that you didn’t know you had in you.
Remember feeling depressed that you never won any medals?
Well, you’re going to earn one when you graduate from high school but you’ll reap plenty during your time in college - for debating.
I’m not kidding. You will learn and you’ll be good at it. Not the best but you’ll surprise yourself.
But that’s barely anything. You’ll do so many awesome things and people will look up to you.
Unbelievable, right?

Here’s something else to blow your mind: You’re going to have a career in advertising after graduation.
I know it’s hard to imagine right now because you always thought you’d end up in movies and TV or even theater.
But don’t worry: You would get plenty of chances to play around with cameras and even perform on stage every now and then.
And people are going to want to pay you for the one thing you do as effortlessly as breathing: Writing.

That’s the beauty of the life you will get to live: You will discover talents and skills that you didn’t know you had but you will never compromise your passions. You will find ways. It’s going to take a while but you will get there. Trust me. I would know.

Lastly: I want you to know that in ten years, you’re going to meet the best friends you will ever have for life.
I know it’s gonna take a while but, believe me, they’re worth the wait.
Remember how you never have anyone to talk to about Star Wars, Marvel Comics, Disney, musical theater, and everything else that you’re into?
Well, believe me, you will never want to talk about anything else once you meet them. They’re going to be the smartest and happiest people you will ever meet.
They’re going to introduce you to new worlds you didn’t even know existed, you’ll go on trips together, you’ll organize and host their weddings, and you’ll have endless game nights, quiz nights, and other fun experiences together.
They’re always going to want to celebrate your birthday in one way or another. Just last night, two of them went out of their way just to see you and treat you to some drinks (even if they don’t drink themselves). That’s how special you are to them.

So why am I telling you this?
I’d rather not change anything in our history because we might undo all our gains but I need you to know that everything is going to be okay.
I hope that this inspires you to spend the next couple of years being more productive. I know everything feels like they suck right now but, I was hoping that by sharing these with you, you’ll focus your energies on honing your craft instead.
Who knows? Maybe if you had just pursued theater as vigorously as you should have, maybe you’d be doing that now along with everything else.

So, yeah, Papa was right. If you had just let it all go, who knows what else you could have achieved.
He just passed away earlier this year, by the way. I wish I can tell you that you had a great relationship with him when he passed but that’s not case. But like I said: Things don’t always work out the way we imagined they would. And that’s okay. We learn. We live.

Since I’ve already reached backwards in time to reach you, let me take this opportunity to send a message forward as well.

Dear future me: Don’t screw this up.
Posted by Unknown at 3:35 AM