So I haven't even blogged about the Avengers this entire year at all, and a lot has certainly gone down already what with next year's movie certainly boiling things up. While I try my darnedest not to keep up or get affected by all the hype, it's another story when it comes to all the merchandise that have recently sprung up (riding on the coattails of the movie, of course). And since Bendis' fan fiction of the franchise is an exercise in self-torment to continuously follow, building up my collection helps keep me in the fandom.

There's really not much of a story there since I've been pretty lucky so far. Just check out how I was able to complete last year's wish list. However, there was one acquisition that I enjoy telling the story of because of its scale! It all started with this post on the National Bookstore Facebook Page.

When I found out about it, they were already announcing the winner. But I was determined to get a copy of that poster or at least a soft copy of the art. To that end, I posted a question on some of my comic book groups on Facebook asking if anybody knew where the art from the poster was. It was one of the responses that got me my first lead: the Singapore Toy, Game & Comic Convention where it was given away for FREE!

A quick google search led me to this picture:

Which led me to this blog, and to this Facebook account! It's the only image of it that's available online. I tried to spot the signature of the artist from the photo to no avail. So I did the last logical thing to do: Contacted the owner of this very poster and offered to buy it from him, but no - I should've known better than to think a fellow geek will part with a limited edition FREE print for money. He wished me luck on the hunt, though.

While I wasn't quite back to square one, I was completely out of leads. In desperation, I posted the photo on my FB wall asking people for leads in exchange for my soul. Manny pointed out that there was a Hasbro event on the same day I posted it, which I knew about but didn't bother to go to, and guess what? They were giving away the poster for FREE! Another missed opportunity. 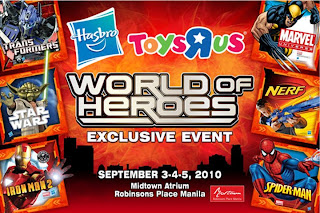 In one final act of desperation, I emailed everyone on the STGCC Contact Us page asking them if they still have some leftover copies that I can buy! At least tell me where they got it or who the artist was! I wasn't expecting anyone to respond, but one of them did, telling me that I can get a copy for FREE from their office! All I needed was to work out the logistics, which basically meant asking some SG-based friends to pick it up for me!

I first asked my college friend Ninay because I knew she was about to fly back here, but she got sick so she wasn't able to pick it up for me. Next person I asked was fellow geek Hec who, as it turns out, works so close to the office where the posters were to be picked up from! I was expecting just 1 copy, but Hec said there were 11 posters plus bigger ones for the Captain America movie, which I didn't care for so I asked Hec to do with them as he pleased. Another geek friend, Mark, visited SG a few days later and brought the posters back. I didn't get them from him when we met up several days later as it was raining. The next time I saw my posters and finally brought them home was exactly on my birthday just last month! How timely!

It's not the most adventurous end that a fan has gone to to build their collection, but it's certainly the most insane I've ever done for my fandom! I still can't believe the length I've gone to for a poster! Right now, the posters (all 9 of them - I gave 1 each to Hec and Mark for their troubles) are tucked away while I figure out where to put one up in my room!

By year's end I'll probably blog about how the collection has grown, and update this entry from 4 years ago (wow!). In the meantime, Avengers Assemble!
Posted by Unknown at 3:29 PM 0 comments