So I woke up in the middle of surgery...

...and other fears realized in a span of one day. 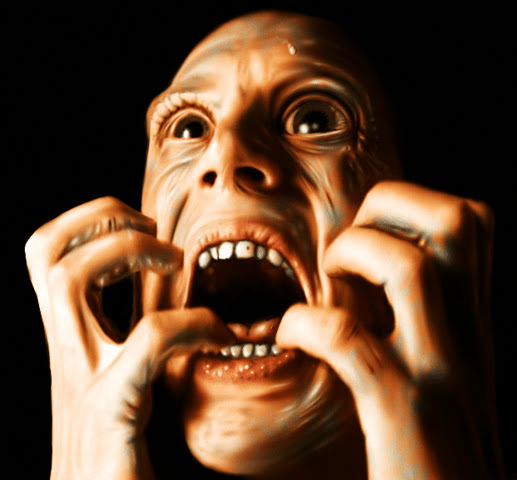 But I'm getting ahead of myself.

Exactly a week ago I was enjoying a non-working but productive holiday that ended when I decided to sleep off what I thought were the onset of hunger pangs at midnight. A couple of hours later I woke up with all hell breaking loose! My entire tummy was on fire!

It took all of my strength to get up out of bed and go to the bathroom for any "unloading" that might help ease the pain in either solid, liquid, or gaseous form. I also did the laying down on my stomach thing. I was rewarded for all my effort by the easing and subsiding pain in my sides. I was hoping I can just sleep the rest of it away and maybe take a halfday from work. Except the remaining pain would not let me sleep. And when I can't sleep, my mind wanders, and so does my hand. I had begun to think that this was more than just a gastric thing. After some careful prodding, I found it. My stomach was hurting all over, but there was one spot where it hurt the most: On the lower right abdomen.

I already knew then what was happening but I just told my mom that I'm going to the hospital because my tummy aches. To my surprise, she decided to accompany me. This scene was actually a rerun of an incident from mid-2007: Same scenario - me writhing in stomach pain and telling her I have to go to the hospital. I took a cab by myself to the UST Hospital emergency room where nurses immediately took lab tests of my liquids while doctors poked and prodded my stomach. Come daylight, the pain was gone (with no medication to boot) and all the doctors could say was that "It may have been appendicitis but the problem was not surgical in nature yet". I was back at the office the same morning.

Since that incident I have prepared myself for the eventuality of a repeat performance. I read up on the appendix, and pretty much understood what all the poking was about! Last week's rerun happened pretty much the same way, except my mom was with me, we went to UERM instead, and when the doctor arrived to do the poking, fears 1 and 2 materialized.

Fear #1: Yes, it's appendicitis. According to my blood tests, my white blood cells are on overdrive - they're fighting an infection and my bloody red and crusting sore right eye, which I also unfortunately contracted the day before, isn't enough to cause it. It was the only indication as none of the tell-tale symptoms materialized - my urine test didn't yield anything nasty, I wasn't feverish, they were bending my legs to check if anything would hurt and pressing my abdomen to check if it would hurt upon release. Nada! Zilch!

Fear #2: My age has become a liability. I believe the doctor's exact words were "Because of YOUR AGE and history (the mid-2007 incident), you're at a higher risk." I was 25 when I had my first run-in and I just turned 30 barely two months ago! How was this happening to me?!

When the threat of an invasive surgery became real, so did fear #3: Being unprepared to handle the expenses. When the doctor laid it down that surgery is the order of the day, my mom asked if I was prepared. Did she mean financially prepared? I just got back from Hong Kong a month ago, I just lost my phone, and was paying debts acquired months before. So, no, I wasn't She actually meant if I was mentally prepared. Oh, that I definitely was. I've thinking about this moment since the 2007 incident and was actually very calm about it.

So we opted to get admitted to the Charity Ward as we couldn't afford my own room and what got me wasn't contagious anyway. I had vomitted twice that morning: Once before they fitted me with an IV bag and once after. The second time was nastier as all I could barf out was bitter yellow bile. They stuck me with a pain killer that did not seem to work - I was still in so much pain. At least until I got to my bed at the Charity Ward to await my operation.

Maybe it was the air conditioning in the Emergency Room, but the pain seemed to have dissipated at the Charity Ward. By that afternoon, cooled only by electric fans, I started having second thoughts about going through with it as I was suprisingly feeling better. But I thought if it doesn't happen now, it's going to come back with a vengeance at some point. Get it over with now before it gets complicated. Thankfully I was able to sleep that afternoon before I had my operation that early evening.

As they were wheeling my stretcher to the operating room, I wondered what my mom thought. This is only the second time she's seen me at the hospital other than the time I was born after all! Was she more nervous than I was? Frankly I was excited! I can notch it up to my list of new experiences this year and it would relieve me of this pain and anxiety! Plus: Being stark naked under the gown was oddly liberating! I knew I was gonna come out of it okay, so I wasn't afraid of never waking up. If anything, I was more afraid of waking up in the middle of surgery!

Which brings us to fear #4. I don't know when I lost consciousness, but I remember waking up on the operating table. I couldn't open my eyes and I couldn't feel anything but I know my arms were spread out. I don't know if they had sliced me open already and were in the middle of extracting that demanding but useless vestigial organ, but I felt the freezing cold! My chest and arms were shaking. My teeth were chattering. And I can hear! I did hear someone say that it was too cold. One even noticed that I was shivering. I panicked more at the thought of being conscious through the rest of the operation in this frigid madness not being able to do anything than being conscious as they cut through to my innards. Fortunately, that lasted only a matter of minutes and the next thing I knew I was at the recovery room, unable to feel my legs. So this was what paraplegia felt like. It wasn't a fear I had come to life but it was still disconcerting.

They told me that for the anesthesia to wear off completely so I can move my legs, I had to breathe deep and exhale. Unfortunately, since I started taking singing lessons and learned proper breathing technique, "breathing deep" for me involves the expansion of my stomach - exactly where they had just patched me up! So I had to breathe through my chest and lungs again, but I kept dozing off, so it took quite a while before I could move my legs again. When I finally lifted both knees, they sent me back to the Charity Ward where I spent the next two days recovering.

It's been a week since the operation. I'm okay now, resting and recovering at home. The staff of UERM really did a good job looking after me. Of course, my concern now is: Will it leave a scar? Will I get fat after this? That latter part is actually fear #5. Here's hoping it doesn't materialize.
Posted by Unknown at 11:57 PM 0 comments