Everyone knows that I've been pretty much watching what I eat because as we grow older, our metabolism tends to slow down and yes! I am a sizist. I do not care for big bellies at all. Of course, it would be nice to pair up my conscious dieting with calorie-burning activities but I'm too much of a wuss to engage in anything physical (except dancing).

In any case, I decided yesterday while I was at the mall that it was going to be my cheat day. I've been a good boy for quite a few weeks actually and successfully cut my beer and rice intake down, so I thought why not. So I got a pair of Hawaiian pizzas from Pizza Hut, a regular serving of curry-flavored fries from Potato Corner, a donut from Gonuts Donuts. The encore was a Miguelito's Fried Ice Cream, which I've been curious about for years but never tried. What I thought was a meager conservative serving at P40 turned out to be this: 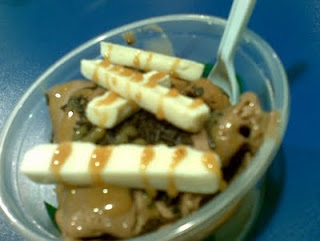 That's "fried" chocolate ice cream with chocolate sprinkles, some choco chip cookies, and solid slabs of white chocolate all topped with oozing caramel syrup. I couldn't finish it. I wanted to puke halfway through. I was pretty disgusted at myself.

In other news, I caught Atlantis' production of the Tim Rice/Elton John musical Aida last Thursday night (right as the storm was brewing) courtesy of my good friend Ingrid. 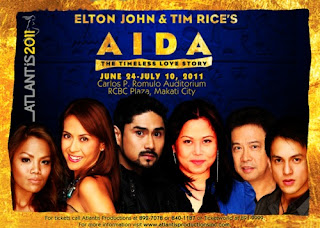 To be honest, it wasn't that good a show as I expected. Don't get me wrong: The musical performances were still great, but coming from someone familiar with the soundtrack, that's to be expected. I guess I enjoyed it because I was experiencing one of my favorite soundtracks live. I'm not certain if anyone not familiar with the music would appreciate it as well.

Alas, even the supporting cast didn't fare any better with the exception of Alys Serdenia who was very captivating as Nehebka (She would've made the perfect Aida IMHO). Rachel's own father Hajji failed to convince me that he's a diabolical architect. Also: There was one note from one of his character's repertoire that I was really looking forward to hearing live (which, done right, would've had the same impact as Wicked's Defying Gravity). That fell flat, but that was far from the most unforgivable part of the show.

That honor fell to Josh Santana as Mereb whose performance kept making me cringe in my seat. Everytime he speaks, I felt like I was watching some campus play, which would've offended me if I paid for my ticket. Same goes for watching the male chorus members dancing as Egyptian soldiers. I can't tell if it's the choreography or the execution because the Nubian scenes (which involved the same actors in dual roles) were performed quite beautifully.

I guess the spectacular set design and the rousing vocal numbers (The Dance of the Robe and The Gods Love Nubia come to mind) were the saving graces of this show, which is not really saying anything because I've always known Atlantis to be uncompromising. Well, I hope they ironed the kinks out. That was their very first show anyway, which was more for the benefit of the press.

Lastly, I caught the matinee of The Music of Andrew Lloyd Webber earlier today. Again, thanks to Ingrid. My first time to watch anything at the CCP Main Theater and I have to say: Anywhere you sit there would be okay. The sound carries through and you can still make out the performers' faces even if we were seated to the side 4-5 rows from the back.

We got in a tad late and missed the first song, but we saw everything else. Eight performers did select songs from Webber's long repertoire, among them Evita, Jesus Christ Superstar, Phantom of the Opera, Sunset Boulevard, among others I'm not quite familiar with (which I shall now rectify). My favorite part was the Cats medley, which closed Act I to roaring applause.

The show felt short for a revue. I wanted to hear As If We Never Said Goodbye and Ingrid wanted to hear Unexpected Song but I guess it's okay. We had a couple of encore performances, which left my palms quite numb from all the applauding I had to do. 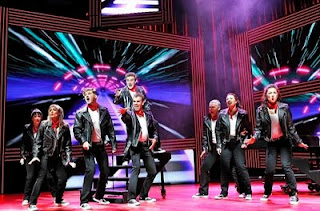 So that's been my stormy last few days. My only drama was my laptop's power brick dropping to the floor as our house got flooded (again). Yes, it was charging. Yes, it short circuited. Yes, it's now useless. Yes, I got a replacement already.
Posted by Unknown at 7:56 AM 1 comments

As always, this is a long overdue blog. Not because I've been putting off writing it, but because I had only about an hour ago met the condition with which I intended to herald my writing this entry. 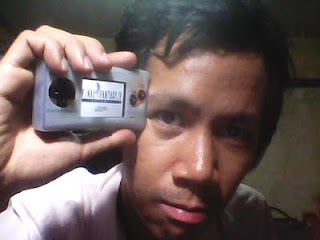 As most things concerning me and my geek cred go, this is one of those long time coming scenarios.

I had already explained the significance of this game in one of my YouTube videos, but I'll break it down for this blog anyway. Cue magic sparkles and sprinkler music.

So 11 years ago I was an American-born Filipino bumming around in Canada at the home of my cousins - one of whom just happened to be a huge Backstreet Boys fan, especially of Nick Carter (as all teenage girls at the time were). I can't quite quote the source but there was a rumor that circulated about Nick playing a character called Cloud in an FF adaptation. As my cousins had a SNES unit, they went ahead and rented FFII (which was what FFIV was known in North America) from the local cartridge shop not knowing that Cloud was not in this version of the game. 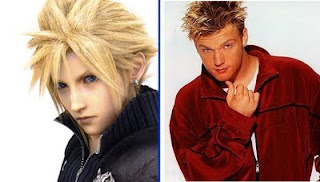 This was also around the same time I discovered fantasy books, so my head was constantly swirling with knights, dragons, magic and all these things. Also, my experience with console games at the time was limited to sidescrollers. I have heard of Role Playing Games, but it was always in the context of pen, paper, and dice games that the kids from my high school never invited me to play. 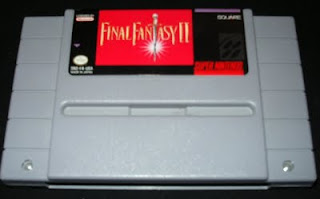 Given these conditions, a kid like me discovering a console RPG with a story rooted primarily on medieval fantasy was the closest I got to my own Neverending Story. I was hooked from the start and it helped that I got to hog the SNES all day because my cousins were at school. Since we only had the cartridge for about a week, I was on that game from the moment I woke up until when my cousins came home. I got through the torture of waiting by reading more books and creating my own world.

Keep in mind: This was a time when walkthroughs weren't readily available online so I really had to navigate my way through the game with no help at all. It was both frustrating and liberating, and every level I succeed in just drove me forward.

Sadly, I never got to finish the game. I guess I took too long figuring some levels out and I think we also had to return the cartridge earlier than expected as we were set to go on a road trip to Seattle (which in itself was a fantasy journey for another time). Though I remember I got as far as the moon, which was more than halfway through the game. 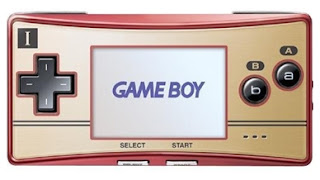 Flash forward to late 2008. I can't remember why but I was obsessed with getting a Gameboy Micro, the 20th Anniversary Edition even. I'm no hardcore gamer, but I guess it was for people like me that the GBM was made for. I got mine brand spanking new at Greenhills for a fraction of the mall price with two free cartridges to boot (which was a complete surprise). I had done no prior research as to which games were available, but when I saw the FFIV Advance cartridge there, I had the inkling that it was the game I abandoned 9 years prior. 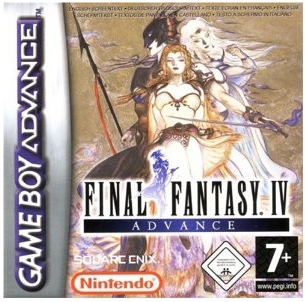 True enough it was. There's a reason why it had changed numbering but I'm not gonna get into that. As soon as I got home, I started playing it and eventually got farther than where I left the SNES version. For some reason I still didn't get to finish it. I think the levels got too hard.

Sometime later I got an EZ-Flash IV game cart, which opened me to 2gb worth of GBA roms, including an RPG specifically made for the Advance: Golden Sun and its sequel The Lost Age, which got me through the bleak period of 2009. Then last year I loaded the game cart with all the FF Advance roms, including FFIV, but for one reason or another, still neglected to finish the game. However, I did finish FF1 and the real FF2. 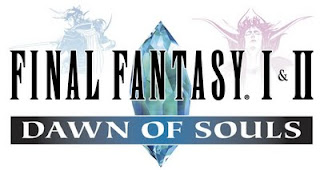 Then we come to 2011, specifically last March when, on the plane to my Canadian vacation, I decide to start playing FFIV again from the beginning with the express purpose of finishing the game at the same place where I started playing it. It would've been dramatic and poetic.

Except that I failed.

Then life and other priorities took over and I found myself only weeks ago deciding to level my characters up so they can defeat the final boss once and for all. As I do this and my characters keep discovering new powers they didn't have before, it dawned on me that maybe it's not them but me who wasn't ready to win yet. I didn't work or prep them hard enough for the final battle.

Earlier, as I was contemplating what to do with the rest of the night, I decided that I wasn't going to let another day go by that this game remains unfinished. I have confronted and vanquished my own personal demons and have learned to live with and let go of the past, including the dark, idle days of 11 years ago. It was just time.

So there I was in battle with Zeromus the final boss of FFIV. There were times when I thought I would lose and start over again, but ultimately I prevailed with all my characters alive.

As I watch the cut scene afterward I felt like I was saying goodbye to old friends. After all, these were characters I've known way before I was a fan of the Avengers or the Wheel of Time. I guess there's still some drama and poetry to the timing what with my recently invigorated sense of self-worth and confidence.

It's done. I finally won. 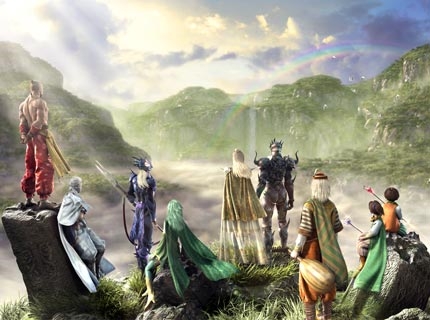