Avengers Forever, Comic Odyssey and a lot of luck!

This blog came out some time 2009 on my Multiply account but I'm reposting it here to link to it from an upcoming Weekly Ketchup blog. 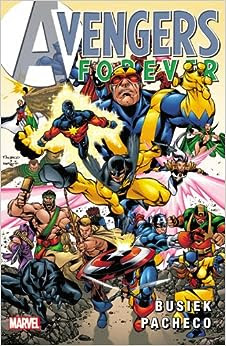 Who here can't tell I'm a fan of the Avengers?

For the longest time, the 12-issue Avengers Forever miniseries had evaded me. I wasn't following the Avengers yet when the series came out in 1999 and I've only been aggressively hunting for back issues and collected editions for the past three years.
Last time I saw the Avengers Forever Trade Paperback was at Fully Booked Gateway about four or five years ago. The book had gone out of print since then, nullifying any special order on the book.
Over the past three years, I've attended every appropriate convention imaginable hoping that a vendor would have the title or have the individual issues. To no avail. What I did turn up, though, were some gems that helped fill up the gaps in my collection.

Earlier this year, Marvel announced that a collected hardcover edition of the series would be released last May. That didn't happen. Bummer.

At this year's ToyCon, I stumbled upon Avengers Forever #'s 1 and 6. I
decided right then to search for the individual issues instead. I also decided I wasn't gonna read those two issues until I have them all.
To that end,  a few weeks ago, I visited every Comic Odyssey and Planet X branch in search for the remaining 10 issues. I think I only saw up to #7.

Then, Marvel announced the hardcover was going to be released this month.
Yesterday, I finally got my copy from Comic Odyssey Ermita.

But that's not the best part.

Prelude No. 1:
I always get my comics from the Comic Odyssey Galleria branch and had become such a fixture at their events or stall during conventions that, I guess, I've become a familiar face.
So much so that they give me 10% discount on my new comics.
I guess it's a bit of reward for my loyalty to their store.
However, since moving to a new company based along Roxas Blvd, close to Robinson's Ermita, I haven't been to the Galleria branch for a time and I've been getting my regular fix at their Ermita branch instead where I'm practically a new face.

Prelude No. 2:
I've been saving up for a lot things and managed to get additional income a few weeks ago.
Last weekend, I practically blew half of it on jeans, shirts, shoes, a bag, sock, undies and other stuff. How can I say no to 50% to 70% discount on stuff?
Don't judge me. I don't shop much.

Between shopping, the Cavite trip this weekend, and the fact that the next payday's a week or so away, I was worried about my finances after the much-coveted Avengers Forever HC.
I didn't wanna go to Comic Odyssey Galleria and expect the discount. After all, they were only being nice and generous. It would be abusive of me to ask.

Yesterday, I decided to face the music. I would probably be broke after this weekend but it would be worth it.
So, after work, I excitedly marched up to Comic Odyssey Robinson's Ermita.
Lo and behold, the management of Comic Odyssey, the nice people who give me discount at the Galleria branch, were there. This week's new comics just came in and they were there to arrange everything.
Having recognized me, we started chatting up. I told them why I don't drop by the Galleria branch anymore, etc. They told me that every Wednesday, the week's comics come into the Ermita branch (the main branch) before they get sent to the Galleria and Eastwood branches on Thursday. As it turns out, their supply was delayed so they were a day behind schedule.

Finally, I asked for the Avengers Forever HC and Mighty Avengers #28, and guess what?
They gave me a 10% discount!

With what I paid for both of them, it seems as if I got the Avengers Forever HC for at least P200 cheaper and even got a free comic for it!
SWEET!

I guess, then, that luck is part being at the right place at the right time and part investing in your relationship with other people.
Posted by Unknown at 11:01 PM 11 comments