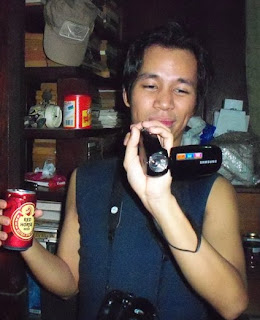 I can't exactly remember in what context I said it during last night's party but at one point I blurted out that "Voyeurism is in the very fabric of my existence". I got a laugh out of Paul for that one. Something to do with me shooting videos of the party.

Which brings me to this week's self-absorbed blog. Maybe for the same reason I like taking pictures, but I've always enjoyed shooting videos. Maybe it's the sentimental chap in me but I like the idea of capturing just that few moments and have it for all eternity - or at least until the format becomes obsolete. VHS tapes, anyone?

I guess that makes me a video voyeur. A vidyeur, if you will.

So as part of my goals, I decided to finally invest on a good digital camcorder after the glorified webcam that was the Aiptek pocket camcorder I've been using these past few years. Just like the GE X5, I had my criteria:

In all my search, I've only encountered one product that matched: The Verzio D520HD which was about P6k. It would've been perfect except for one tiny detail: The brand. I realizedbased on my awful experience with Aiptek that I need a global brand with strong product support from both the brand and the consumers. Also, making the purchase just didn't feel right wherever I checked.

I've also considered getting one of those flip cams like the Kodak Zx1 or Zi8 despite the lack of a swivel screen. Though I only fancied the Zi8 for its mic slot. I was this close to getting the Zx1 when I stumbled upon a store in TriNoMa selling it for half its original price. I guess it wasn't meant to be 'cause when I came back for it, the item had been sold.

Then I came across the Samsung SMX-C200 Memory Camcorder, which I had quickly dismissed because it didn't run on AA batteries, lacked an earphone jack, had a pinkish glow and bounced between P10k to P13k. But as fate would have it, I would run into this camcorder again at Pixel Pro Megamall while doing some last-minute Christmas shopping. I just thought I'd ask what price they can offer me for it but I was quickly sold on the spot.
Why?

1. From the original price of P13k, they gave it to me for only P8.5k. After getting this quote, I just thought I'd check somewhere else and this was the cheapest offer.
2. While the unit that I spotted was the same pinkish one that turned me off, what they gave me was a sleek black one!
3. The package includes a bag and 4gb SD card already so I didn't have to worry about them.
4. Plus the Pixel Pro ladies were really nice and friendly.
5. The 10x optical zoom was a welcome bonus that the Verzio D520HD didn't have!

I didn't even read much about it (I was surprised to discover it actually has a manual focus) but I guess if it felt right, it's meant to be. I've been using it for about a month now and it hasn't failed me yet. I made a few bad choices before (Exhibit A: Aiptek) but I have no regret with this one. I guess I've developed this instinct when buying gadgets.

Today I decided to try out its built-in video editor (Intelli-studio). What's so cool about it is that I don't need to install it. I just need to plug the camcorder in the PC and the program s right there in its hard drive! For a stripped down basic editor, it's pretty awesome. Just check out the test video below.

My only concern now is looking for spare batteries. 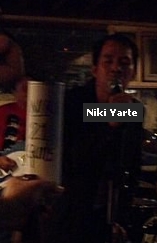 For as long as I can remember I've always been a performer. Ever since grade school, if there's a show to be done, I'm always there. I've always enjoyed the preparation and rehearsals leading up to it and I don't think I've ever experienced stage fright come show time.

In high school, I was lucky enough to go to a school that was strong in its support of the performing arts. We had a program at the end of every quarter and each year we staged a musical and a Christmas variety show.

Because of all that, I learned stagecraft and how to sing, dance, act (on stage anyway). The biggest tragedy of my life was that I didn't capitalize on any of it. I mean, I knew the basics but I could have really made something out of myself if I just took up classes outside of school.

By the time college rolled along, my endeavors leaned towards organizations, student councils and debating. There were few chances afforded to me to perform and by that time I was already rusty. What I realized later on was that I was much more comfortable on stage than I was on a podium.

Fast forward to now and my evaluation of the life that I've led. I never dreamed of being a star but performing has always been in my blood. So when I was drafted to perform at last year's Rockstar BSM for a charity drive, I was more excited than nervous at the idea. I was nervous because I haven't really performed in front of a crowd for a long time (not counting Rockeoke and Broadwayoke) but I wanted to take the opportunity to gauge how far I've come. I mean, I quit smoking so I can have better control of my vocals.

I don't remember the exact events that led me to performing Green Day's "21 Guns" but the thing is that it wasn't my usual fare. I like the song but I wasn't sure I could pull it off. As a friend puts it, I'm more into ballads and Broadway. Then again, "21 Guns" is a melodic song and the Broadway version from "American Idiot" the musical was just amazing.

To prepare for Rockstar BSM, I had to practice the song for about a week - singing it in karaoke and recording my voice with a minus one version of the song. I even sent one of my earlier (abysmal) recordings to my friends Adrian and Ingrid for a bit of help. I even swore off ice cream and everything that might compromise my vocals during that period.

Unfortunately, on that fateful Friday and because it was a payday, me and the office mates decided to have something from McDonald's delivered and I just had to have the new Creamy Brazo Sundae. Discipline fail.
Maybe because of that and the smoke at Big Sky Mind but a few minutes before show time, I could feel my throat tightening up. And I just had to be the first performer. Then I was so caught up with Karen's intro that I forgot my cue.

Everything was a mess but I had to do it. After I was done, the whole thing just kept going over and over in my head, which compromised my enjoyment of the rest of the evening.
Then I when  I checked out the video, I realized it wasn't as bad as I thought it was. It was far from perfect but then again I have to remember that I'm taking baby steps again. Like I mentioned in this entry, part of this whole crusade is stumbling over and getting back up again.

I just gotta chalk all this up to experience and strive to do better the next time (and I hope there will be one). Meanwhile, I just gotta continue practicing. I already have as much control of my vocals now that I'm not smoking and, as a lot of friends and Wawi Navarroza pointed out, I have stage presence down pat.
Good thing I haven't lost that part of my earlier training.

Rej won the night with her rendition of Alysa Alano's "Keys Me" but I was one of the recipient of the "Best-Dressed" award. Hell yeah!


PS. How do rockers do it? Smoke, drink and perform at the same night in a smoke-filled room?
Posted by Unknown at 10:47 PM 0 comments 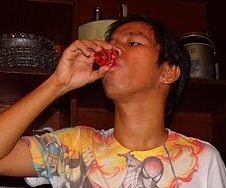 I wrote an entry on my journal about how awesome 2010 has been. Unfortunately, it reached 3 pages - too long for a blog. So here I have a list of things I would remember about 2010 - good and bad. I got as far as 75 last year, so now I'm going to kick it up a notch and try to reach 100!
Not even counting all the OGMs, Kapihans and various other hang outs, 2010 has been a really memorable year with friends, family and fandom! I had to edit some stuff and move items around just to keep this list at 100. Good things must really come to an end but I'm thankful for a great year!
Posted by Unknown at 4:38 AM 3 comments