Geekdom is a vast realm of varied interests and I have long cast my lot with fantasy and mythology. Last week alone, I found myself gorging on as much magic and fantasy as I can handle - and somehow found some connections between my hobbies, current events, and existentialist questions.

First things first: I finished the entire second book of Avatar: The Legend of Korra and, while not awful, it just didn't quite capture my imagination as much as Legend of Aang did. Its world of automobiles, "movers", mechas, etc. were just alien to me. In fact, the only episodes I fully enjoyed were the saga of Wan (spin-off please?). I would've appreciated the world better if bending somehow explained the new technologies. That being said, I'm sure still gonna follow book three.

On the gaming front, I'm still on Warlords Battlecry 2 and Age of Wonders 2 (yeah, it takes a while). I've been playing WB2 on a daily basis since Geekstractions and I've now conquered three quarters of the world (with a sad win-loss record of 1:2). Meanwhile, I've been spending my free Saturdays on AoW2, playing a couple of really long levels at a time, and is now one level away from finishing the game! Yay me!

Book-wise, I started Daniel Arenson's Firefly Island. I didn't remember the premise of the book and why I bought it so I went into blindly, not certain if I liked it a couple of chapters in. But the more I unraveled Arenson's world, I became so much more invested that I plowed through about eight chapters last Saturday! The narrative is easy enough to follow, the characters are likable, and the world-building was wonderful! It reminds me a lot of David Eddings' and Brandon Sanderson's works!

I also caught up with some movies that I deliberately missed because of bad reviews: Wrath of the Titans, The Immortals, and 300: Rise of the Empire. Titans was just plain awful in every conceivable angle while Immortals and Empire were serviceable enough - they were at least pretty. My main problem with the mythology in Titans and Immortals, though, was that the "twilight of the gods" was a Norse concept and not Greek. Can somebody just make a film about Ragnarok and be done with it?

Coincidentally, I saw Rise of an Empire last Thursday - exactly the anniversary of 9/11. Just the day before, Barrack Obama addressed the ISIS situation. It was then that I acknowledged (internally) that I am afraid, especially at the prospect of another world war (thinking about Russia and North Korea as well). While violent conflicts are par for the course of any fantasy epic in any medium, I don't think I'm prepared to handle such a situation if it hits close to home.

While we're on the subject of fantasy and religion, I've always wondered what it said about me that I am now averse towards the magical and fantastic doctrines of organized religion but sold on anything with dragons, fairies, avatars, titans, and the like. Then again, fantasy doesn't force me to believe that wizards are real the same way that religions venerate their saints and prophets. Then again, I'm no atheist. I'd still like to believe in a powerful unknowable force that permeates the universe. Maybe that's why I haven't lost my sense of wonder? Or maybe they're not connected?

Anyway, I also had the pleasure of teaming up with Paolo and Denice, both members of the Geek Fight committee, at last Wednesday's Boho Quiz Night hosted by Jon (one of my usual quiz night teammates). We didn't win but it was a fun evening nonetheless. I got to participate in Paolo's impromptu mini trivia game at our table since he was showing us some of the questions he used before. As usual, if it's not related to fantasy and mythology (or comics), I'm useless. 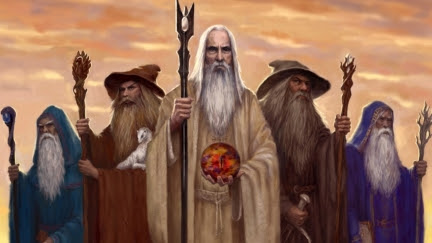 In other news:
I went to my college friend Hanna's kid's baptism way up in Bulacan yesterday. It's always good to see the old gang, especially Tintin who's been based in Singapore for more than 5 years. Of course, I found something deplorable about the priest's sermon. It's the thing I hate most about religious doctrines: The divisiveness.

We tried to catch the livestream of the UAAP Cheerdance Competition on the road but eventually our feed was cut off just as it was getting interesting. And while the general Thomasian community is glad that the UST Salinggawi Dance Troupe finally made it back to the top 3, I'm glad they delivered a performance that I can get behind because the past few years have just been mediocre at best.