Turning 30 in a Few Hours

If you've been following me on Tumblr (Or on Facebook or Twitter for that matter), you'd have probably noticed a series of photos I've been uploading daily over the past few days, starting with the one of me and my mom when I was born.
It's sort of like a countdown to my birthday, which is just a few hours away actually.
And it's not just any birthday.
I'm turning 30.

I'd like to give this entire campaign a deeper meaning like being "a look back on the past 30 years and seeing how far I've come" kind of deal but I just know it's a load of bull. I'm just an attention whore. Period.

In any case, notice that all of the pictures I've posted are scanned photos back from when digital imaging was but a dream. The thing is that from 2005 onwards, which is about when I was 23 years old, all pictures of me were from digicams already and exist somewhere on the web in one way or another. So I thought the scanned pics (most of them scanned straight from the negatives) are most likely a surprise to some people, especially to my friends now. I was interested in how people would react to old photos of me. (What part of "attention whore" is hard to understand?)

In the meantime, in honor of turning 30, I shall leave you with a couple of photos I had taken at a studio when I turned 21, specifically so I can remember how I looked like back then in case I turned out differently somewhere down the road. Yes, I know look awkward in these photos and it's not really something I should share or be proud about, but hey! That was me at 21. 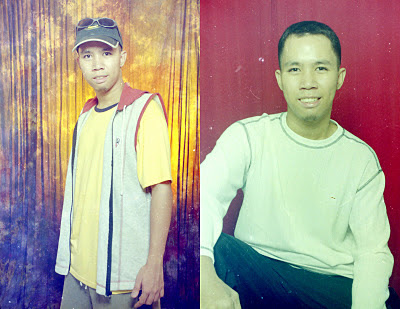 I actually don't see much of a difference between these guys and me now.
Whether that's a good or a bad thing remains to be seen.
Here's to turning 30.