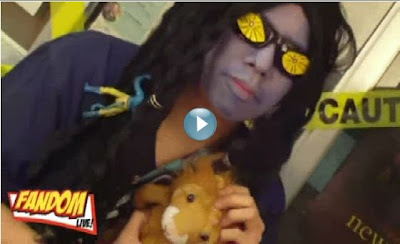 Late last year, Dek, Tobie and Paolo came to me with a proposition to revamp Fandom Live for this year.

One of the most important changes was to favor quality over convenience. That meant taking the extra long route from shooting an episode to doing post-production.

Another change was to streamline the segments. That entailed lessening the number of hosts and maintaining regular and consistent segments. As opposed to having different styles, color schemes and whatnot for almost every episode.
One of those regular segments turned out to be We:View, which was ultimately assigned to me to produce, direct and edit.

One last important change was to finally settle on a home where the episodes would be hosted. After ustream and youtube, we've finally come home to Fandom Cafe.

At first, the idea seemed fantastic. It would mean I get to play with equipment, software and do what I've always loved to do: production.
Until the real world sets in, of course, and our audio won't sync with our video, footage get magically lost and ultimately our episodes (mine, in particular) get delayed. That doesn't even include taking the time to take the trip to Fandom Cafe and actually edit the videos because I don't have the proper equipment at home. Or the fact that we have to constantly sync our skeds so we don't burden each other.

So there are these problems that we're incessantly looking to avoid with each new episode that we do, even those that aren't assigned to me (Dek handles the non-we:view episodes).
Of course, all these setbacks get blown in the wind the moment we see the final product. Case in point: our We:View episodes for Avatar and 2012.

2012 was shot first as the supposed season opening because we couldn't shoot Avatar without Rocky who had more to say about the James Cameron flick. However, I felt that Avatar was a better opener because of all the gimmicks involved. So despite already having introduced 2012 as the first episode of the new season, I worked on and finished Avatar first. Despite the delays and spending almost a day on it, the result was just amazing. Not Avatar-amazing but it was definitely worth the effort and it deserved to usher in the new era for Fandom Live.

Behind the scenes, I'm thankful our current creative team hasn't gotten to the point of arguing and bickering with each other over details. At least, not on set, which, most often than not, is the Fandon Cafe mezzanine.

We actually argue our creative differences through emails but never to the point of taking things personally. By the time we start rolling, all of us are clear and united about what we want to achieve. Maybe because we have respect for each other's role in the production. During We:View shoots, Tobie acts as our headwriter and Dek is my second cam and cinematographer, and I let them do whatever. They certainly didn't question me when I decided not to release 2012 as the premiere episode nor when I asked for a certain shot to be done for Sherlock Holmes.

So that has been the experience so far with the first quarter of the new Fandom Live. We got more plans for upcoming episodes, so stay tuned.
Posted by Unknown at 1:51 PM